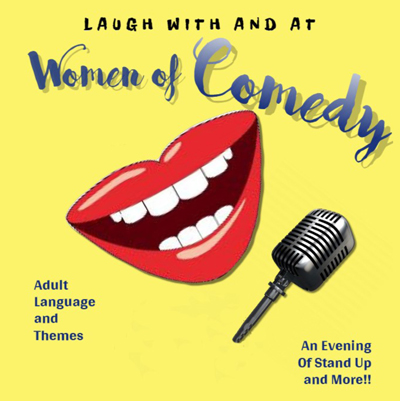 Organizer Kathy McSteen explains, “Last year our “Women of Comedy” review sold out the Venice Performing Arts Center as part of the summer lobby series. It was so much fun for the comediennes and audience, I wanted to make it happen again, but take advantage of a theater venue.”

“While the main course is traditional stand up comedy, expect appetizers and sides of improv, singing, dancing, and a sketch or two. The Lemon Bay Playhouse is the perfect intimate setting for our comedy buffet. And, it’s not just for, and about, women. We’re aiming for broad, adult, funny bone appeal with a bit of spice ‒ but no raunch dressing.” This show contains some adult subject matter and language.

Purchase your tickets now. You will not want to miss this performance.

“What’s got 14 legs, stands up, dances, sings, and acts up?” The answer is “seven local comedians starring in “Women of Comedy” night at Lemon Bay Playhouse.” In alphabetical order they are:

Daniel Cole is a retired educator and a quadruple talent – a singer, musician, comedian and actor. He’s a member of Venice Theatre’s “Troupe in a Trunk” and this spring appeared in multiple speaking and singing roles in “Grapes of Wrath.”

Lynn Lane is a retired educator from Minnesota who now lives in Sarasota year-round. She organized and hosts monthly Sarasota open mics at J. Dubs Pub and Subrosa, performs stand up at clubs and private venues, was a 2017 finalist in Visani’s First Comic Standing and won first place in McCurdy’s 2018 Open Mic Challenge.

Katie Styles is originally from Oklahoma but has called Tampa Bay home for the last 13 years. Katie’s performed at Sidesplitter’s, the Improv, Coconuts, O Brien’s Pub, Imorov U Theater, and Beef O Brady’s Comedy Cave. Katy is the proud mother of a 10 year old boy and enjoys spending time on the beautiful gulf beaches and saying horrible (but funny) things into a microphone.

Babs Vitale is originally from Massachusetts and now a year-round Venice resident, Babs is a comedy dinner theater veteran who’s performed at Venice Theatre and Visani’s Comedy Club in Port Charlotte. Babs is developing a solo storytelling event and is part of the Englewood Dance, Etc. studio’s Halloween flash mobs.

Jacqueline DeGroot Wands moved from Long Island four years ago. One of her childhood passions was acting. Here in Florida, she’s returned to the stage, this season in Lemon Bay Playhouse’s “Later Life,”  the Charlotte Players’ comedic “Not Now, Darling” and “The Games A Foot,” as well as Venice Theatre’s ” Troupe in a Trunk” Educational Outreach program.

Tara Zimmerman has made her husband of 27 years (Bob) and others, from Vancouver and New York City to venues around the Tampa Bay area, laugh for  over a decade. She was a finalist in 102.5 The Bone’s “Last Comic Stranded” competition and McCurdy’s 2018 Open Mic comedy challenge.

Reserved seat tickets are $15.
There are no refunds for tickets. Exchanges are allowed up to 48 hours before the performance.