Lemondrops Summer Theatre Camp was cancelled in 2020 and 2021.

The seventh year of Lemon Bay Playhouse’s kid’s theatre camp was held July 9 through July 28, culminating in two evening performances of the play “What Lurks Below” written by Cheryl Hastings. The play tells the story of three kids who fall in a sink hole and meet and befriend many unique under-ground characters while trying to find their way back home. Of the 21 campers who attended, ten were returning campers. Ten students were granted full scholarships funded by the Lemon Bay Playhouse Camp Endowment Fund. The camp has become well known throughout the community. Enrollment started on April 1 and was filled by April 10. We had 12 campers on the waiting list of which two were invited when life circumstance left two students unable to attend. Camp activities included a variety of acting exercises to develop acting skills, a craft project called make your own Mars bug which were used in a camper written skit, and games related to the play, including; Twenty-one Questions That May Bug You, a form of Jeopardy. In keeping with the underground theme, snacks included mole nails (Bugles), slug slime (GoGurt) ̧ ants on a log (White chocolate dipped pretzel stick with chocolate sprinkles) and mud cake (Chocolate cake with chocolate pudding). Campers enjoyed the creepy, crawly foods. Cheryl Hastings directed the camp, assisted by Debra Martin, Marilyn Barton, Brianna Dudgeon, Henry Reisinger, Matthew Black and Nathan Black. We wish to thank the kids for their hard work and congratulate them on a fine performance. We also would like to thank Lemon Bay Playhouse for their support in allowing us to provide this opportunity to the youth of our community.

For the sixth year in a row, Lemon Bay Playhouse will host The Lemon Drops Summer Theater Camp. The three-week camp, led by Cheryl Hastings, will include developing acting skills through team building exercises, theater games, improvisations, arts and crafts, and rehearsals. All campers will have a role in the play, “The Land of Arbour”, written by Cheryl. The play takes place in the Medieval Times in which a Queen, a Wizard, soldiers and dragons live in peace, love and harmony.

The camp will run from 9:00am to noon, Monday through Friday, July 9 – July 27, ending with two evening performances on Friday, July 27 and Saturday, July 28. The cost for the three week camp is $210.00 per camper. The camp is limited to 21 students ages 8-14.  If a child has” aged-out” and has been part of the camp in the past, they are welcome to enroll. Openings fill quickly. Early registration is encouraged. A $40.00 deposit is required. The application and deposit are due June 15. Applications can be found at www.lemonbayplayhouse.com or can be picked up at the Lemon Bay Playhouse box office, Monday through Friday, from 10:00am to 2:00pm or by calling the box office at (941) 475-6756.

We offer scholarships funded through generous contributions from individuals and businesses to children whose family can demonstrate need based on income and special circumstances. If seeking a scholarship please attached the Scholarship Application Form to the completed Registration Form. Scholarships are awarded on a first come, first served basis – please apply early. All forms must be submitted by June 15, 2018

Select this link for more details and to download the brochure, the registration form and the scholarship application.

For the fifth year in a row, Lemon Bay Playhouse will hosted “The Lemondrops” summer theatre camp for children from ages seven through fourteen. The three-week camp, taught by Cheryl Hastings, included activities such as improvisation, theater games, body movement, blocking, tongue twisters, puppetry and rehearsals for the 45 minute performance of the play, “The Day of Tranquilitist”. The play script was written by Cheryl.  All students had an opportunity perform in the show.

The camp will run from 9:00am to noon, Monday to Friday from July 10 through July 28, ending with 2 evening performances on Friday, July 28 and Saturday, July 29. The cost for the camp is $210. The class will be limited to 21 students. Scholarships will be offered for those families that demonstrate a need. Openings will fill quickly, so sign up early! There is a $40 deposit to hold the child’s place in the camp. The application and deposit are due June 1, 2017. Call the LBP Box Office at (941) 475-6756 for more details.

We offer scholarships funded through generous contributions from individuals and businesses to children whose family can demonstrate need based on income and special circumstances. If seeking a scholarship please attached the Scholarship Application Form to the completed Registration Form. Scholarships are awarded on a first come, first served basis – please apply early. All forms must be submitted by June 1, 2017

For the fourth year in a row, Lemon Bay Playhouse has held the Lemondrops Summer Theatre Camp for children. Again, the camp was taught by Cheryl Hastings and Patty Tuff, two of our volunteers dedicated to teaching children the methods of acting. This year, there were 20 campers, ranging in age from seven to thirteen. Many were repeat students, including a few that attended all four camps. This year, there were fourteen returning actors. This is a real tribute to the teachers and aides involved in the program. This popularity of the summer theatre education opportunity demonstrates the need for this children’s education and exposure to the theatre arts.

The classes ran Monday through Friday from 9:00am to noon. The classes started July 11th and ran for three weeks. The camp included snacks for each of the future thespians. In addition, the campers received an acting workbook, a water bottle, and a camp shirt.

The students were instructed by Cheryl and Patty. They were assisted by five volunteer camp helpers: Matthew Black, Nathan Black, Kayla Gebert, Dori Mann, and Myranda Villacis. The campers learned improvisation, characterization, blocking, puppetry, stage direction, and many more acting related activities. All of these techniques were then used in performances provided to parents and family at the end of the class. The performances were of two shows written by playwright Cheryl Hastings. The plays were The Pin Head Brigade and The Nut Family Reunion. Patty and Cheryl each directed one of the single act plays. Preview rehearsal for the summer camp students was performed for LBP volunteers on Friday, July 29 at 10am.  Performances for the family and friends of campers were held on Friday, July 29th and Saturday, July 30th at 7pm. A “make your own sundae” cast party immediately followed the last performance. The families and friends of the campers were invited to the cast party.

Four of the children that participated in this years Lemondrops Summer Theater Camp have been selected for a part in the production of “Bob’s Your Elf”.

This year’s camp and performance continues to foster the dreams of Rita Corn who started the program with her husband, Dick. Thanks to all involved in this camp and for the continuation of this tradition at Lemon Bay Playhouse.

Lemon Bay Playhouse will be offering another Lemondrops Summer Theatre Camp in 2017. Please keep an eye out for announcements in the near future. 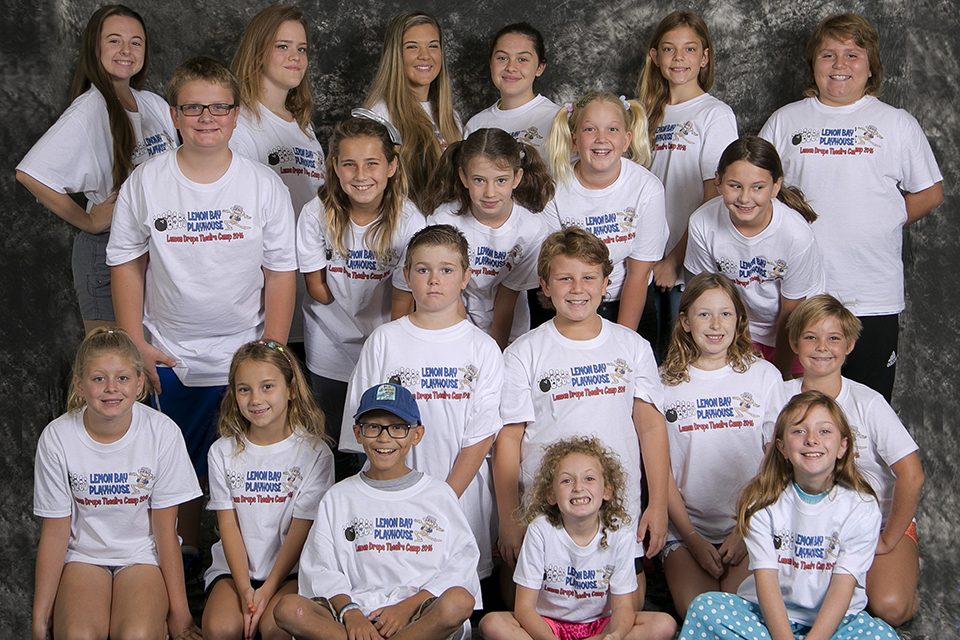 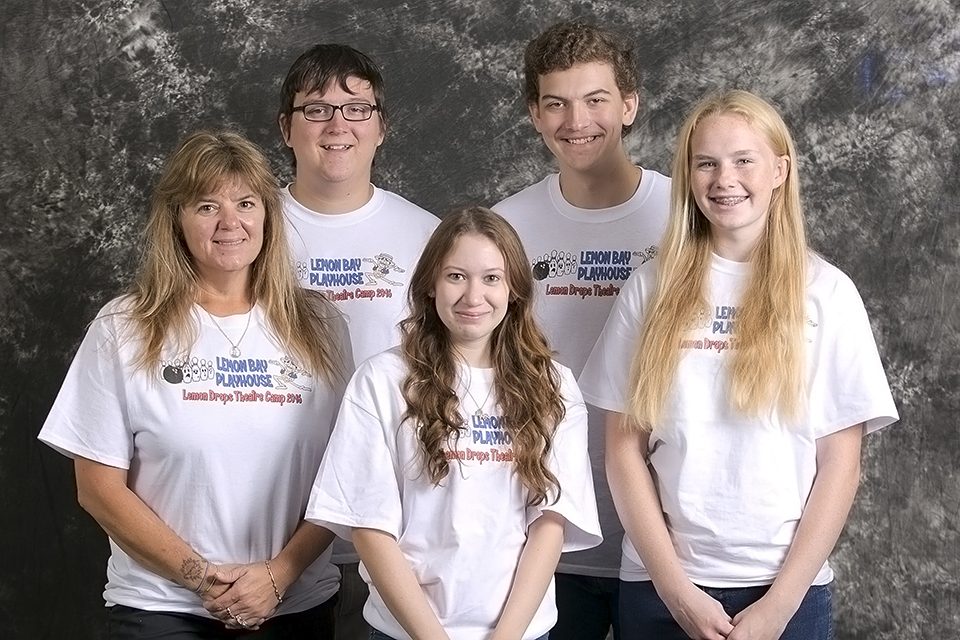 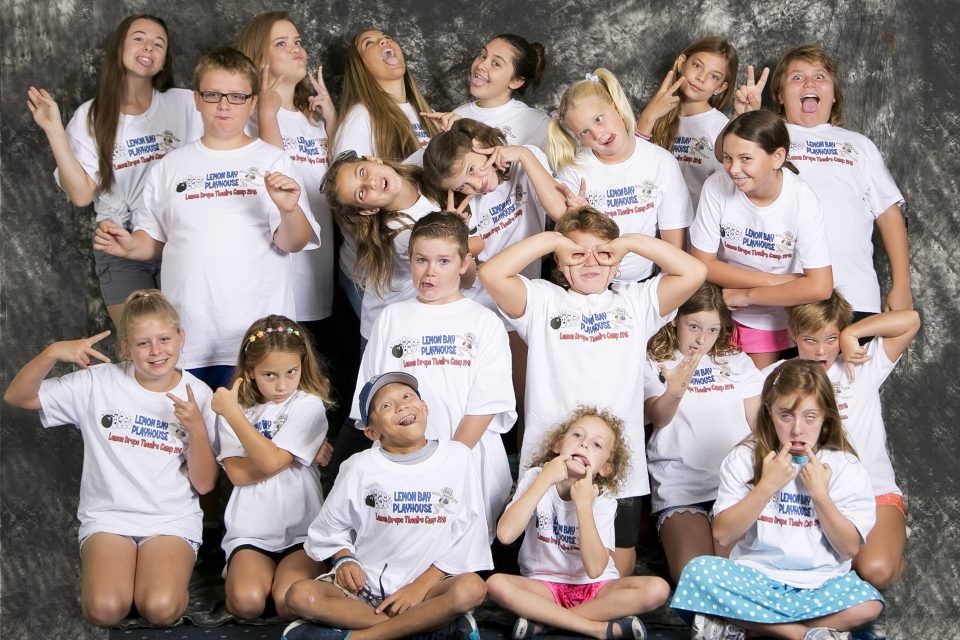 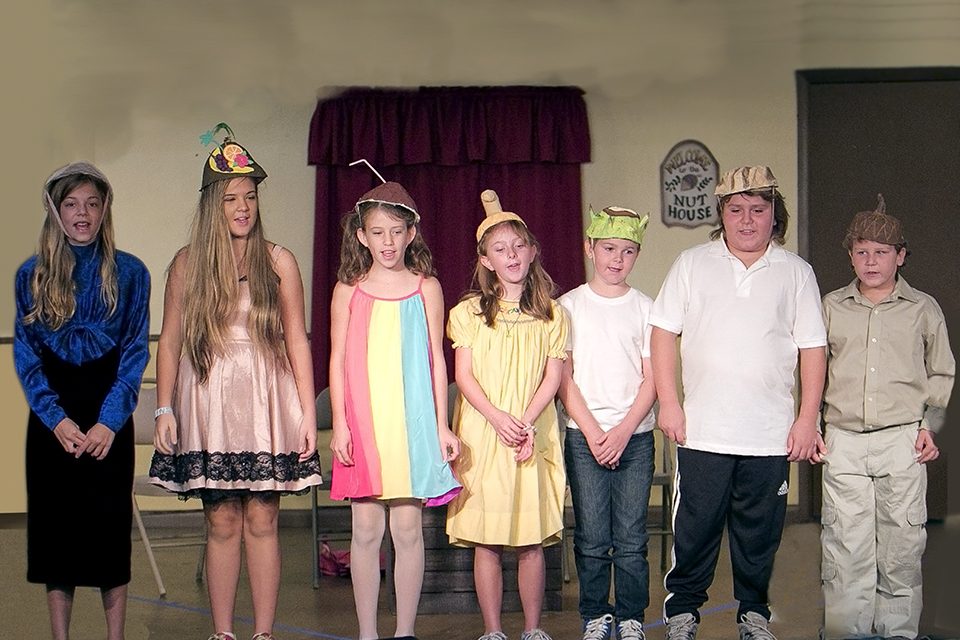 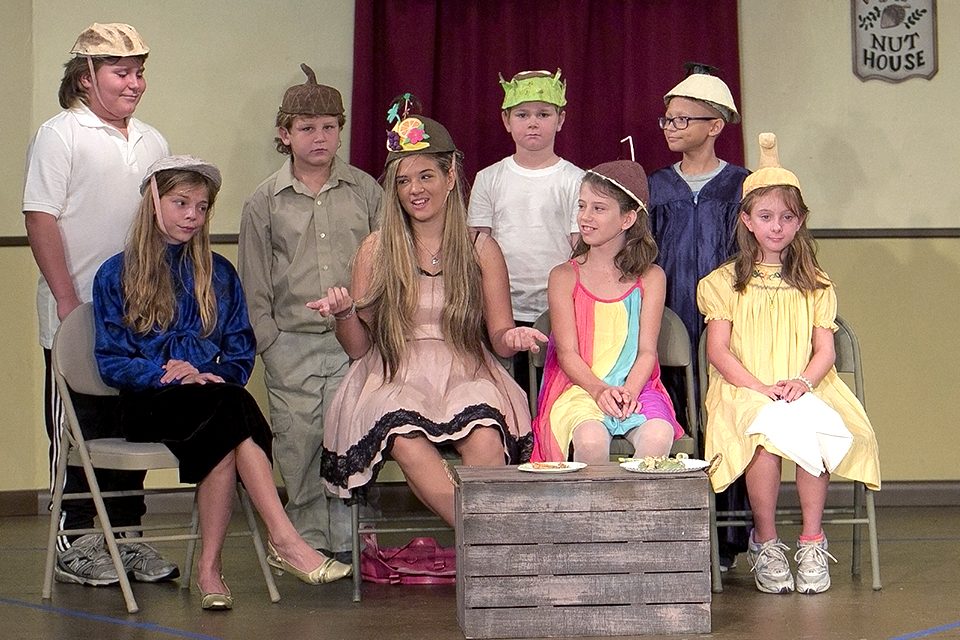 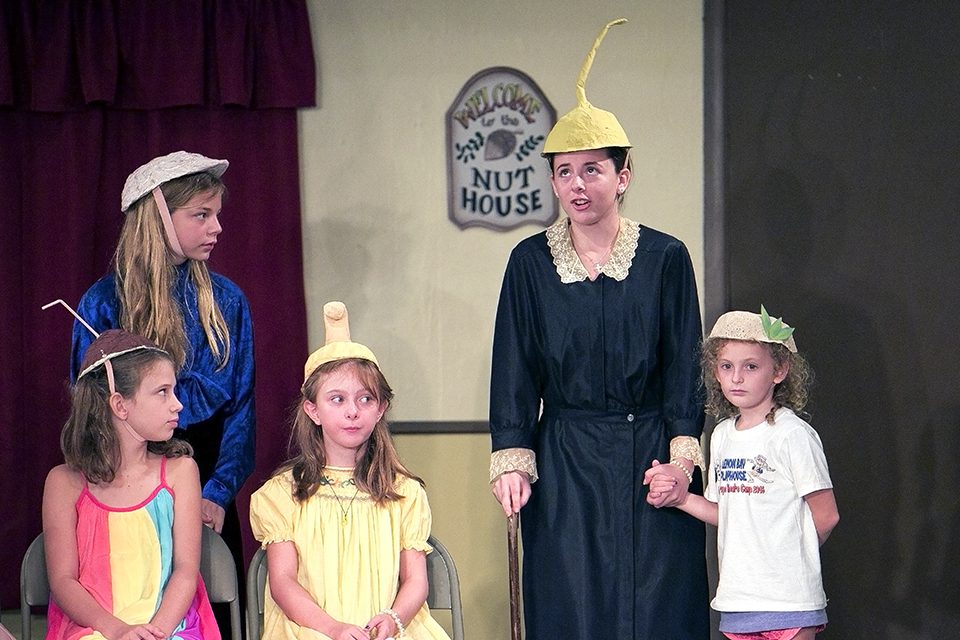 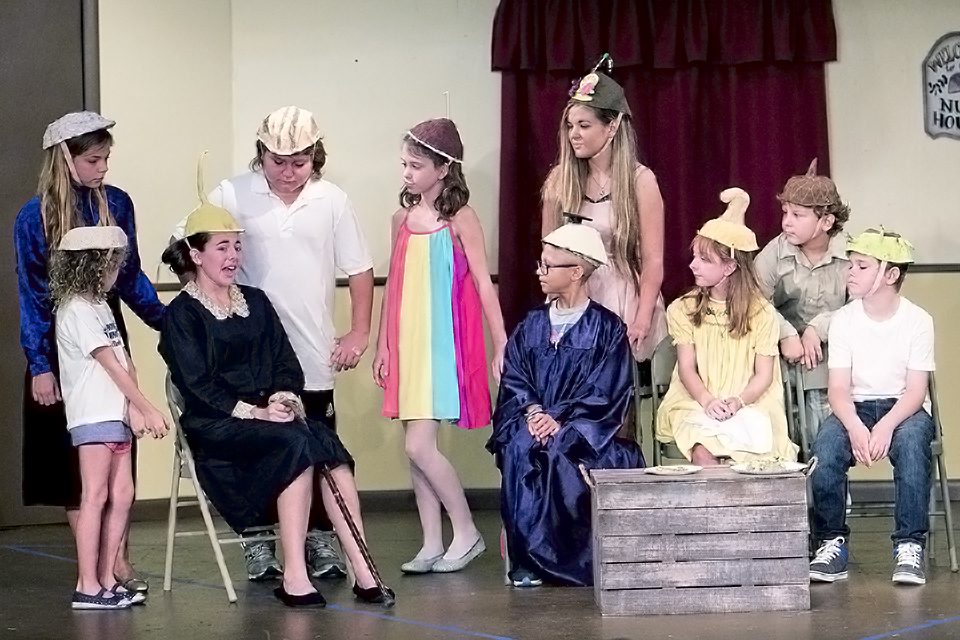 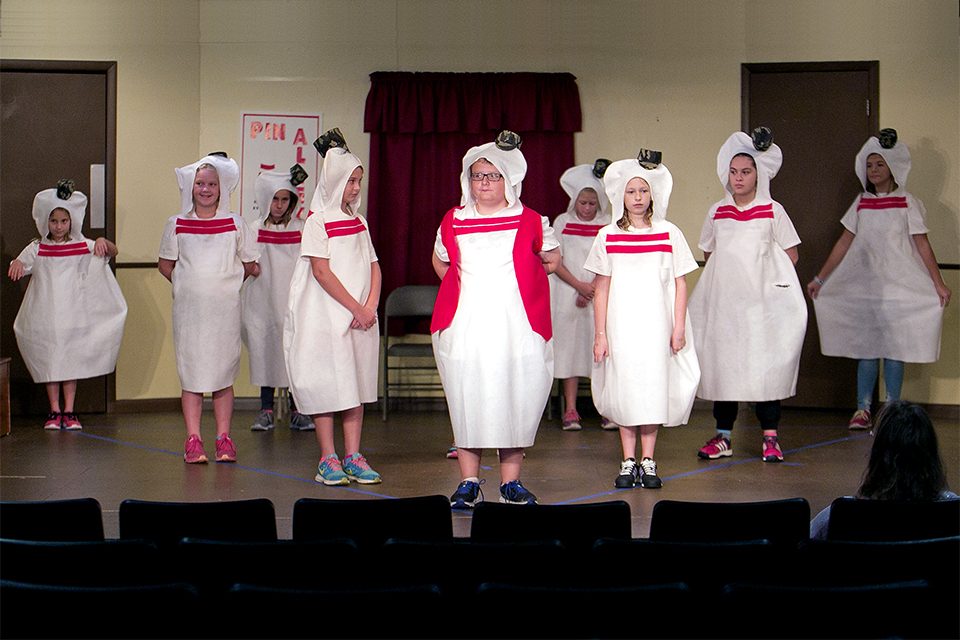 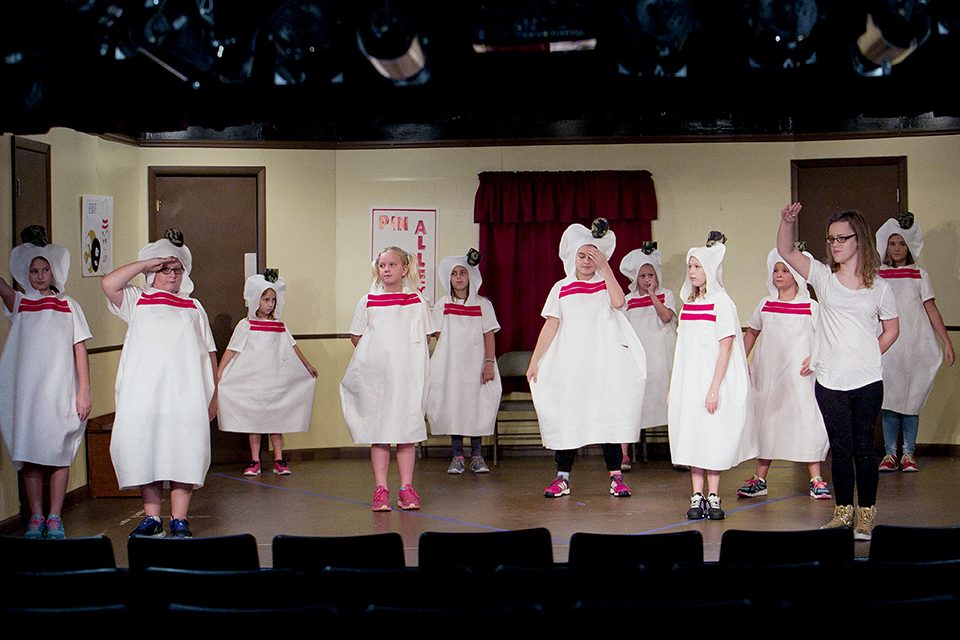