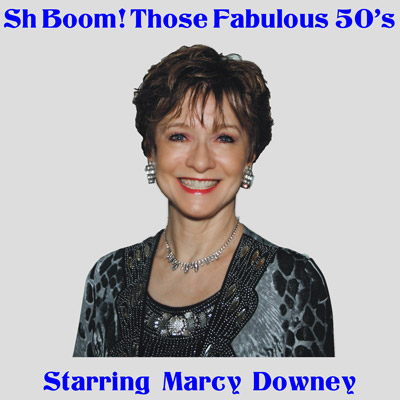 In 2013 Marcy Downey debuted her new cabaret show at Lemon Bay Playhouse and has appeared to a sold out audience since that time. This will be her fifth appearance on our stage.

With a lifetime of show business experience, and an impressive list of stage appearances including New York, Los Angeles, Lake Tahoe, and Florida, Marcy is the ultimate entertainer.  Her singing voice has attracted critical acclaim from coast to coast, and her stage personality “lights up every room in which she appears”.

In addition to her singing, Marcy adds that rare comic element that makes for a memorable evening of smiles, laughter and satisfaction.

This season, Marcy will take you on a musical journey through the decade that brought us The Everly Brothers, Brenda Lee, Elvis, The Righteous Brothers, Patti Page, The Platters, and so many more.  Marcy sings the greatest hits of the 50’s and tells hilarious tales of those happy days, and portrays comedy characters that will have you laughing all the way home!  Go to www.marcydowney.com for a video demo of her performances.

Reserved seat tickets are $20.
There are no refunds for tickets. Exchanges are allowed up to 48 hours before the performance.