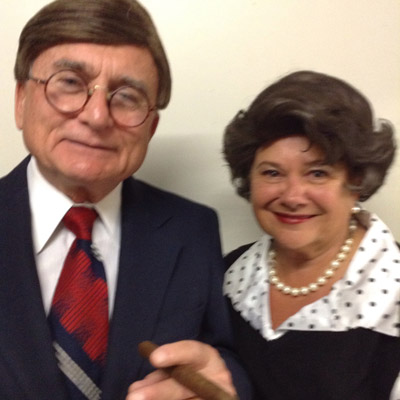 Get out your calendars and a pencil!  Lemon Bay Playhouse is proud to announce that the Eighth Annual Shorts Aloud Festival, produced by Kathy Amelia, is scheduled for Saturday, February 18 at 7:30pm and Sunday, February 19, at 2:00pm and 7:30pm.  This show, “The Art of Readers Theater”, is presentation by the Lemon Bay Playhouse Readers Theater Group. The performance consists of six short comedic selections, with intermittent entertainment from Carol Burnett and Friends, covering a variety of life situations with an interesting twist. These three performances guarantee a unique theater experience with a light-hearted and amusing flair. Please reserve a seat and come see the humorous side of life! All we ask is that you sit back and let your imagination be set free. By doing this, we assure that you will leave the theater entertained and laughing.

The Readers Theater format is an interesting example of live theater where the scripts are read and there is minimal set design and props.

PRESS PRAY – by Seth Freeman
Directed by Richard Blanchard
Taking refuge in a church can have its rewards.  Feeling vulnerable, you might turn to prayer for consolation – but it may be more trouble than its worth!
Actors: Marilyn Barton and Barbara Harrington

THE PSYCHIC PSPA – by Cynthia Faith Arsenault
Directed by Richard Blanchard
A desperate widow seeks the “insight” of a psychic to solve a problem she is having with her dearly departed husband.
Actors: Regena Wilfong and Suzanne Williams

THE SPEEDING TICKET – by Bob Naquin
Directed by Sally Johnson
We break into a cold sweat when we see the blue flashing light of a law enforcement officer in our rear view mirror.  But not Starlight Moon!  She may be old but she knows how to talk her way out of a speeding ticket.
Actors: Celia Connolly, Derek Dutcher, and Cori Hane Palmere

ACT II
EVERYBODY’S SEXY FOR SOMEBODY – by Frank Canino
Directed by Paul Bravo
Two senior couples are looking for fun in all the wrong places.  The wives decide to start a new career as telephone sex kittens while the husbands pursue a new hobby.  But their plans intersect in an unforeseen meeting.
Actors: Michael Levasseur, Donna Vodraska, Suzanne Williams, and Jim Zakas

CHOOSING THE MENU – by Bruce Boeck
Directed by Paul Bravo
As we grow older, our diets change.  What we used to eat and still want is on the “no no” list.  When we are home, it’s easy, but eating out – well there’s a challenge.
Actors: Richard Blanchard, Jennifer Furey, and Cori Hane Palmere

NO FRILLS AIRLINE – by Dory Kaiser
Directed by Sally Johnson
Flying isn’t what it used to be.  Take it from these airline passengers, the flight attendant and their Captain!
Actors:  Marilyn Barton, Charlotte Dobney, Jennifer Furey, Robert Kurtz, Donna Vodraska, and Jim Zakas

Mark your calendars and buy your tickets soon at the special price of $12.00.